Jewish psyop presents Jesus as LuciferAs governments become increasingly authoritarian, having locked us down for 18 mos and now persecuting citizens who refuse to take dangerous vaccines, many Christians think it is “God’s Plan” and let it happen as these appear to be the “end times” as described in the Book of Revelation.

This is not God’s plan but rather a kabbalist Jewish psyop to trick people into embracing their genocide, thinking it is a Biblical prophecy.

Makow–Christians! You’re being deceived by the greatest deceiver in the universe, Satan himself. Communism (satanism) is a cancer that will devour us all. If we don’t resist, and get behind resisters, nothing will stop it.

Mass noncompliance is all that is necessary to stop Covid Communism.

If enough people refuse vaccines, covid tests, lockdowns, and segregation there is nothing the government can do.

While many see the Book of Revelation as a prophecy from God, it is a blueprint for the Luciferian New World Order.

H.P. Blavatsky, founder of the Theosophical Society, and Albert Pike,  author of Morals and Dogma both acknowledge that Revelation is kabbalistic.
Unlike most of the Bible, Revelation is largely comprised of abstract symbolism and numerology, both of which are components of occultism ie. kabala. Why else would the globalists follow a plan that is eerily similar to Revelation?

In John 10:16 Jesus says, “I have other sheep that are not of this sheep pen. I must bring them also. They too will listen to my voice, and there shall be one flock and one shepherd.”

Chapter 7 of the book of Revelation contradicts Jesus’ words and says that the “chosen” are only Israelites, with 12,000 from each of the 12 tribes chosen. Not Jewish? You’re out of luck according to Revelation. Get in line for… The Mark of the Beast. Revelation chapter 13 gives the number of the beast as 666. While it was written in Greek, ancient Hebrew used letters to represent numbers. “Vaw”; is equivalent to W and has the numerical value of 6. WWW = 666 13:16-17

It also forced all people, great and small, rich and poor, free and slave, to receive a mark on their right hands or on their foreheads, so that they could not buy or sell unless they had the mark, which is the name of the beast or the number of its name.
Sounds awfully similar to left wing plans for a vaccine passport, doesn’t it?

Also consider: 13:15 The second beast was given power to give breath to the image of the first beast, so that the image could speak and cause all who refused to worship the image to be killed. An image with the ability to speak – how else would you describe a TV, computer, smartphone, etc. to someone 2000 years ago?

That WWW equals 666 is not hard to figure out, in fact I first heard of this over 20 years ago. It is no coincidence that the political establishment has decide to force a WWW/666-connected vaccine passport upon the population.

THE PLAGUES OF CLIMATE CHANGE

However, this is one plague that did not occur in Egypt: 16:8-9 The fourth angel poured out his bowl on the sun, and the sun was allowed to scorch people with fire.  They were seared by the intense heat and they cursed the name of God, who had control over these plagues, but they refused to repent and glorify him.

We have been subjected to global warming/climate change propaganda for years. This summer (2021) we have had record-breaking heatwaves across the northern hemisphere, as well as major increase in bushfires.

Meanwhile, Bill Gates has been proposing insane experiments intended to block the sun’s rays. Some brainwashed fools think that Gates is in fact our atheist saviour, but governments have been researching weather manipulation for decades. HAARP is said to be capable of opening the atmosphere, which protects us from the sun.

Gates and the globalists are creating the illusion that they are saving humanity from the plagues of Revelation, but in reality this is a scam to collapse the economy and make us blame God for our predicament which is in fact the result of a high tech psyop. God’s work, or Lucifer’s?

Revelation 22:5 There will be no more night. They will not need the light of a lamp or the light of the sun, for the Lord God will give them light. And they will reign for ever and ever.

Sounds nice, but consider the following:

22:16 “I, Jesus, have sent my angel to give you this testimony for the churches. I am the Root and the Offspring of David, and the bright Morning Star.”

Morning Star is another name for Venus, also known as LUCIFER.

You wouldn’t you need the sun when you have the bearer of light with you. But why would Jesus say that he is Lucifer? Lucifer is also mentioned in Isaiah in the King James Bible, in the New International Version it is written “morning star”: Isaiah 14:12-14 How art thou fallen from heaven, O Lucifer, son of the morning! (NIV:  morning star, son of the dawn) How art thou cut down to the ground, which didst weaken the nations! For thou hast said in thine heart, I will ascend into heaven, I will exalt my throne above the stars of God: I will sit also upon the mount of the congregation, in the sides of the north: I will ascend above the heights of the clouds; I will be like the most High.

There is no logical explanation for this other than Lucifer is masquerading as Jesus.

Mass Murder H.P. Blavatsky and other occultists have said that the pagan god Saturn, known to the Greeks as Cronus, is in fact Satan. There is also much evidence to suggest that Moloch, the god of child sacrifice, is another rendition of Saturn. 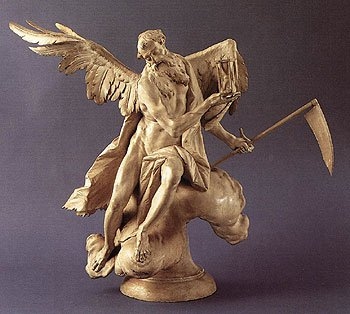 In Greek art, Cronus was often pictured holding a sickle: mythopedia.com/greek-mythology/titans/cronus Revelation 14:14-19 uses the word “sickle” 7 times in this context: 14:14   I looked, and there before me was a white cloud, and seated on the cloud was one like a son of man with a crown of gold on his head and a sharp sickle in his hand.

14:19-20   The angel swung his sickle on the earth, gathered its grapes and threw them into the great winepress of God’s wrath.  They were trampled in the winepress outside the city, and blood flowed out of the press, rising as high as the horses; bridles for a distance of 1,600 stadia.

Bible literalists would have us believe that this is divine judgement, but evidence points to this being an occult plan for mass murder.

Many Christians are convinced that they have no choice but to quietly accept their fate as it is a Biblical prophecy, but in reality the Book of Revelation is a satanic blueprint for slavery and genocide, designed to convince believers that this occult plan is the work of God. 2 Corinthians 11:14-15

And no wonder, for Satan himself masquerades as an angel of light.    It is not surprising, then, if his servants also masquerade as servants of righteousness. Their end will be what their actions deserve.

2 thoughts on “Book of Revelation — Marketing Human Genocide as Prophecy”