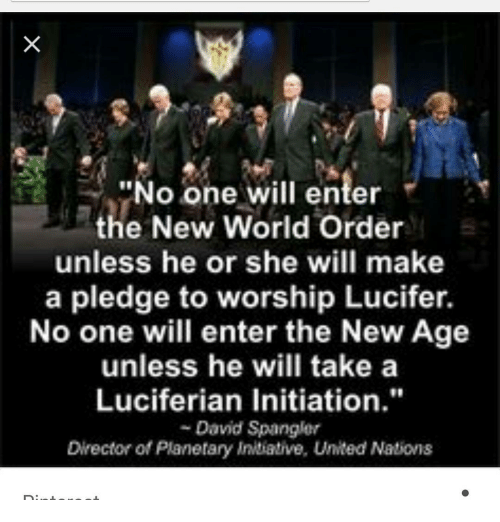 They’re quite literally implementing David Spangler’s pronouncement (left.)
The COVID vaccine is the Luciferian initiation, the Mark of the Beast.Welcome to Satanist insanity land. It’s showtime folks! Time to wake up from our stupor. We’re witnessing the Collapse of Rome in live stream. Western Civilization is going down. This nightmare is never going to end. dead. Humanity is the casualty of Satan’s hatred of God.
Meanwhile they distract us with money they will soon demand with interest. Debt. “You’ll own nothing (after you repay your share) but you’ll be happy.” If you say so, Klaws Swab, it must be true.

The pressure WILL become unbearable.

If they prevent the non-vaccinated from entering restaurants,  prevent them from earning a livelihood, when will they prevent them from buying food? The whole point is to coerce people into taking the “vaccine.” Where will they stop? Will they move resisters to quarantine camps where they will be at the mercy of the medical killers, like the elderly in nursing homes?
Leo Hohman unveils the three developments that will result in our total enslavement: 1. Digital Vax Passports  2. World Digital Currency  3. Internet Passport

Leo Hohmann; Several new technologies that appear separate and unrelated will soon converge, creating a giant digital trap that will easily entice the uninformed masses…. Most people will sleep-walk right into the trap, which will ultimately reduce them to a human QR code – trackable, traceable, and 100 percent dependent on Big Tech and big government for their existence.

“Gov. Cuomo very forcefully “asked” business owners to eliminate 30 percent the state’s population as potential customers and treat them as non-persons. This … reminds one of the Nazi propaganda that coerced Germans to refuse to do business with Jews.

Digital health passports: The snare that will lure many into the one-world cashless system
by Leo Hohmann
(henrymakow.com)

I’m going to unpack each of these seemingly separate threads that will gradually merge into a single overarching socio-financial control grid.

The most imminent agenda item needed to jumpstart this system is a successful launch of digital health passports.

France, Italy, Ireland, Germany, Greece and many other nations have started mandating these passports on their citizens, many of whom are protesting in the streets.
Citizens protest health passports in more than 150 cities throughout France.

The movement toward digital health passports in the U.S. is happening more gradually but it’s picking up steam.

When asked for clarification on exactly what COVID rules might be implemented, White House Press Secretary Jen Psaki said nothing is off the table.

Remember that phrase: Nothing is off the table.

This could involve rounding up the unvaccinated and placing them in isolation and quarantine camps.

An academic consortium consisting of six universities already has a contract with the U.S. Department of Homeland Security to provide training for government, law enforcement, healthcare and private-sector stakeholders on how to quarantine “large portions” of rural communities.

But the drive to digitize the lives of Americans will start in the cities and move outward.

Despite what anyone tries to tell you, separating Americans by vaccine status is a historic first. It has never before been tried, not through the polio or smallpox outbreaks of the 1920s, 30s and 40s, not during the Spanish Flu. Not ever.

De Blasio ordered businesses to deny service to the unvaccinated, which accounts for 30 percent of the city’s population. It remains to be seen how de Blasio will enforce this edict.

Will he call out the police to shut down businesses not demanding a show of papers from their customers?
New York Gov. Andrew Cuomo is also shooting for vaccine passport mandates statewide but knows he has to be a little more diplomatic in his approach.

“I believe it’s in your own business interest,” he said, “to run a vaccine-only establishment…. We have apps, just say, ‘you have to show that you were vaccinated when you walk in the door.'”

In other words, “Show your papers.”

Think about what Cuomo is saying here.

He is very forcefully “asking” business owners to eliminate 30 percent the state’s population from their field of potential customers and treat them as non-persons.

This is pure fascism and reminds one of the Nazi propaganda that coerced Germans to refuse to do business with Jews.

If New York’s business owners listened to Cuomo, they would make it impossible for non-vaxxed people to feed their children.

The digital passports require people to download a scannable QR code on their cellphone that will allow businesses to know they’ve been vaxxed before they are allowed to enter and receive service [buy or sell].

That leads us to the second leg of the digital trap that is baking in the technological oven – a new global digital ID system that is capable of working in conjunction with the digital health passports and the new medical-vaccination complex.

The leader in this stream of tech is the ID2020 Alliance, a collaborative of more than 35 members including Accenture, Microsoft, the Rockefeller Foundation, MasterCard, IBM, the International Chamber of Commerce, MIT SafePaths and Bill Gates’ GAVI Global Vaccines Alliance.

In February 2021, ID2020 launched the Good Health Pass Collaborative to encourage a seamless convergence of all the COVID-19 vaccine credentialing apps being developed by many different organizations.

“Paper vaccine certificates can be easily forged,” the ID2020 Alliance warns in a press release. “The purpose of health credentials is to securely prove that a person has received a vaccine or PCR test. The new alliance is particularly targeting travel to ensure credentials work cross-border, cross-industry and are frictionless.”

The alliance has published a white paper on the topic for those seeking more details. 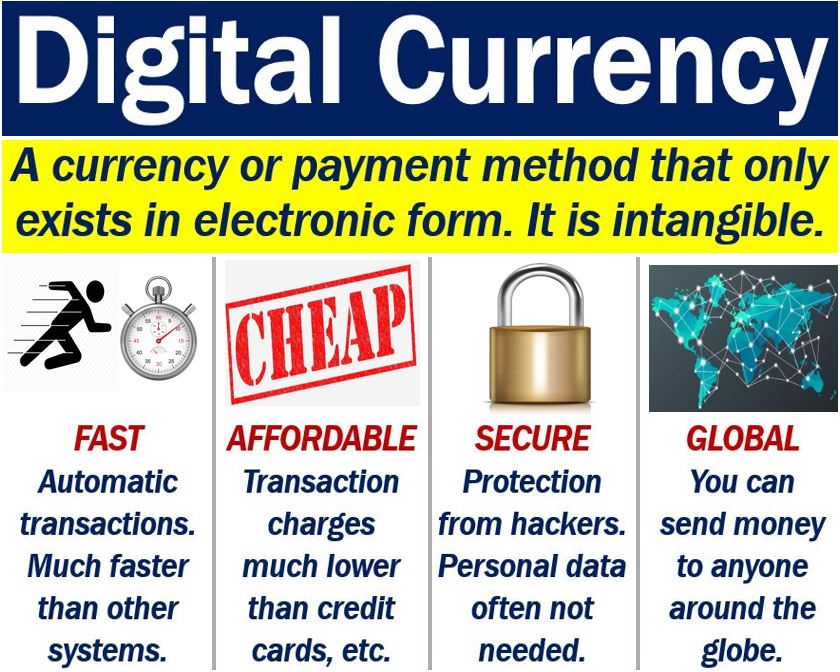 Yet another piece to the evolving techno-fascist puzzle is the new digital currency.

The world’s central banks are working on a programmable digital currency based on block chain technology. This means they will be able to track your spending and shut you off for any reason.

The International Monetary Fund posted an article on its website in July lauding India as a global leader in the drive to eliminate cash. And of course COVID was mentioned as expediting the move away from paper money. The IMF noted:

“COVID-19 has accelerated the use of contactless digital payments for small transactions as people try to protect themselves from the virus. These advances build on the India Stack–a comprehensive digital identity, payment, and data-management system that we write about in a new paper (Carrière-Swallow, Haksar, and Patnam 2021).”

As you can see in the above statement, the goal is a comprehensive digital identity, combining one’s health data and vaccine status with banking and other personally identifiable data.

Klaus Schwab warned us ahead of time about the trap he and his elitist buddies were setting for us.

“The Fourth Industrial Revolution will lead to a fusion of our physical, biological and digital identities,” Schwab told the Chicago Council on Global Affairs in November 2020.

Even before that, in his 2018 book, Shaping the Future of The Fourth Industrial Revolution, Schwab wrote:

“Fourth Industrial Revolution technologies will not stop at becoming part of the physical world around us–they will become part of us.

“Indeed, some of us already feel that our smartphones have become an extension of ourselves. Today’s external devices–from wearable computers to virtual reality headsets–will almost certainly become implantable in our bodies and brains.”

When he penned these grandiose ideas in 2018, it seemed like the pie in the sky musings of an out of touch futurist and few paid attention. Post COVID, it’s in our faces and ready to be implemented.
INTERNET PASSPORT

The final leg of the technological program to control humanity is the Big Tech giants working together to scrub all dissident voices from the Internet. Their ultimate goal is to create a system where all users have an Internet passport, subject to periodic review of your online activity.

The Big Tech giants have already said they actively share information in an effort to crack down on “white supremacists” under the Global Internet Forum to Counter Terrorism, a body previously reserved for targeting the Taliban and al-Qaeda.

PayPal announced it will be working with the notoriously Marxist Anti-Defamation League to scour the Internet, looking for “extremists” and “anti-government” voices in order to shut off their PayPal donation buttons.

Under this Chinese-style social scoring system, those guilty of online infractions get publicly shamed and silenced. Information collectors are paid to snitch on their neighbors and family members. Once your social credit score dips below a certain level, you become so discredited that it gets tougher and tougher to find a job, travel by plane, train, bus or car, get loans or put your kids in the better schools.

Those providing counter-narrative information will be flagged, given a warning, and eventually blocked as disseminators of “disinformation.”
DEPRIVING DISSIDENTS OF THE INTERNET

You lose your freedom of speech, but that’s not all.
In today’s society, being removed from the Internet means you won’t be able to buy or sell online or work a job that requires an internet connection.

So the health passports, currently being rolled out worldwide, will block you from in-person shopping for food and necessities while the coming Internet passport will block you from ordering your necessities online. You will essentially be left with the black market, assuming one will spring up for those deemed “unclean” and “unfit” for the modern world because of their dissident views.

All of these technologies will merge at the intersection of Big Data, big banks, Big Tech and big government. Your social credit score will now be tied in not only to your Internet activity but to your bank account and your vaccine status. Welcome to the Great Reset, a/k/a New World Order.

Add in advances in AI and facial recognition and millions of surveillance cameras and you are talking about a lockdown slave state that makes George Orwell’s 1984 look like a picnic in the park.

But don’t complain. It’s all “for our safety.”

People cannot be trusted to do the right thing, to believe the true facts, to lead the kind of life that results in a peaceful, happy society. All must conform to the new masters.

Now is the time to fight this system. But in order to fight it, you must recognize its existence and stay one step ahead of the cabal’s evil game plan.
At some point the trap door will shut. It will be too late to opt out. You either comply or become a non-person. An enemy of the state.

These separate avenues of evolving technology will eventually be merged to create a society in which everything, and every person, is digitally tracked. Not just the movement of their physical bodies, but their actions, behaviors, even their thoughts.

The elites are counting on us accepting this system in its early, fragmented stages. Most people think compartmentally. They don’t connect dots. They will be deceived.

Watch the creepy 42-second video put out by the government of Australia urging people to create a digital identity.

Once this trap door is shut, it will be very difficult to get out of its clutches. Don’t download apps, pay with cash whenever possible, and stop sleep walking into the New World Order.