to advance their agenda of world tyranny.

Nature abhors a vacuum. That’s why the Illuminati own and control the world.

of using their own common sense.

A flawed foundation lies under most evangelicals’ understanding of God’s moral dealings with humanity and particularly Jews. This foundation drives their support of the Jewish state. It is called “Scofield Dispensationalism.”

Written at the dawn of the modern Zionist movement, Scofield’s commentaries suggested that a nation of suffering and persecuted Jews, though Christ-rejecting, had a divine right to return and occupy Palestine. This idea was virtually absent from Christianity before the mid-1800s. How did such permission gain so great a foothold that it’s now unquestioned dogma for most evangelicals? …CYRUS SCOFIELD

Cyrus Scofield taught that … God gave the patriarch and his descendants unconditional rights as God’s chosen people. They were guaranteed the Promised Land and rights of occupation, even without obedience. Scofield said Israelites automatically receive “all blessings” by just being there….

Scofield, as no other figure, legitimized Christian participation in Zionism. Evangelicals then united pre-tribulationism and its “rapture escapism” with Zionism. The new prophetic script for Christians read like this:

The right of God’s dispersed and persecuted chosen people to the Promised Land is covenanted to them by God unconditionally, forever. It is the duty of every Christian to honor God’s great last day’s regathering of His people, bidding them godspeed by any possible means. If any nation or person refuses to stand by God and the Jewish nation, he is in league with Satan.

Israel makes possible fulfillment of biblical prophecy that empowers Jesus to return as predicted. Without Israel’s existence and the hundreds of prophecies it fulfills, Christ cannot return. Christ stated clearly that “it must needs be that Scripture be fulfilled” before He could go forward with God’s plan.

Criticizing the state of Israel is thus to oppose the Almighty. It is to curse the Jewish people, incurring dire judgment. “I will bless those who bless you and curse those who curse you…” (Genesis 12:3)

In accordance with an end-times storyline created by Scofield and others, Zionist evangelicals now keenly watch Israel for necessary fulfillment of the following Scriptural predictions:

1. Rebuilding a Jewish temple. The new temple is necessary because Scripture says anti-Christ must profane it, and proclaim himself to be god. Without such a temple and its defilement, Christ cannot return as He predicted.

2. Israel enters a “covenant” or peace treaty with Anti-Christ.

Once such a covenant has taken place, Daniel’s prophetic “clock” of a “week” or seven years leading to Christ’s second second coming will begin to tick.

The problem, however, for pretribulationists is this: If the church is to be raptured when the anti-Christ is “revealed,” what does Scripture mean by that term? Does it mean “revealed” as in anti-Christ signing a peace treaty with Israel or “revealed” such as occurs in the middle of Daniel’s week when anti-Christ manifests himself as the enemy of the Jews, bringing his armies against Jerusalem (Ez. 38).

At that time, he desecrates the temple, kills two thirds of Jerusalem’s inhabitants, and exiles the remainder to the nations. Also, since most evangelicals believe Christ could come in his first second coming and rapture us out without preconditons, perhaps we will not even have to wait for the “revealing” of Anti-Christ at all.

The pretribulationist viewpoint could not be simpler: Dark as the world may become, if the church above all things makes sure to bless Israel, it will be blessed and kept safe. Jesus will be faithful to take out true believers before anything resembling great tribulation begins.

In reality, nothing could be more unbiblical, corruptive to the church and the Jewish people, and ultimately dangerous to Christianity than building up that Zionist one-world system of oppression Scripture calls Babylon the Great. (See, ‘Babylon the Great’ is Israel)

Pre-tribulationism is thus escapism. Calvinists also very largely adhere to this idea. It fits well with their belief that once we are soundly “born again” we are always saved, even if committing the grossest sin.

If we as citizens fail in our duty to occupy and resist evil, this Calvinist/pretribulationist theology says Jesus understands. He will not require us to bear the consequences of our neglect. We will soon be gone. The consequences will be passed on to those of our children who are not born again, not fortunate enough to be raptured.

Of course, Scripture does promise a first resurrection or “rapture” of the dead and living of Christ at His second coming. Yet a high percentage of evangelicals actually believe the rapture will occur within several years. What’s the point of knocking ourselves out opposing evil, especially as Jewish big media corrupts our children…because very soon we’ll be in heaven? …

Yet Jesus said that the church would not be taken out of tribulation. Instead, He said, “In the world ye shall have tribulation.” (John 16:33) 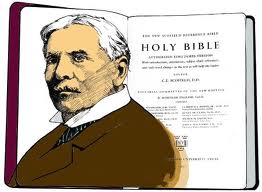 And who was Cyrus Scofield?  A con man and Illuminati Jewish agent

As a young con-artist in Kansas after the Civil War, he met up with John J. Ingalls, an aging Jewish lawyer who had been sent to Atchison by the “Secret Six” some thirty years before to work the Abolitionist cause.  Pulling strings both in Kansas and with his compatriots back east, Ingalls assisted Scofield in gaining admission to the Bar, and procured his appointment as Federal Attorney for Kansas.  Ingalls and Scofield became partners in a railroad scam which led to Cyrus serving time for criminal forgery.

While he was in prison, Scofield began studying the philosophy of John Darby, pioneer of the Plymouth Brethren movement and the “any moment now” rapture doctrine.

Upon his release from prison, Scofield deserted his first wife, Leonteen Carry Scofield, and his two daughters Abigail and Helen, and he took as his mistress a young girl from the St. Louis Flower Mission.  He later abandoned her for Helen van Ward, whom he eventually married.

Following his Illuminati connections to New York, he settled in at the Lotus Club, which he listed as his residence for the next twenty years.  It was here that he presented his ideas for a new Christian Bible concordance, and was taken under the wing of Samuel Untermeyer, who later became chairman of the American Jewish Committee, president of the American League of Jewish Patriots, and chairman of the Non-sectarian Anti-Nazi League.

Untermeyer introduced Scofield to numerous Zionist and socialist leaders, including Samuel Gompers, Fiorello LaGuardia, Abraham Straus, Bernard Baruch and Jacob Schiff. These were the people who financed Scofield’s research trips to Oxford and arranged the publication and distribution of his concordance.

It is impossible to overstate the influence of Cyrus Scofield on twentieth-century Christian beliefs. The Scofield Bible is the standard reference work in virtually all Christian ministries and divinity schools.  It is singularly responsible for the Christian mistaken belief that the Hebrew Prophecies describe the kingdom of Jesus’ Second Coming, and not in fact the Zionist vision of a man-made New World Order.

And it is precisely because Christians persist in this belief that they remain blind to the reality of Zion.  Scofield served as the agent by which the Zionists paralyzed Christianity, while they prepared America for our final conquest.

One thought on “How Gullible Christians Became Zionists”