Rabbi Marvin Antelman  (193?-2014) deserves credit for exposing the modern Illuminati as a “heretical”  Cabalist Jewish movement named after its progenitors Sabbatai Zvi (1626-1676) and Jacob Frank (1726-1791.)Sabbatean-Frankists, a mostly Jewish movement that includes Gentile Freemasons assumes the identity of the target population and termite-like, subverts it from within.A Jewish authority, Gershom Scholem, describes them as “demonically possessed.” They are the Satanists behind Communism and the Scamdemic. Obama, the Clintons, Biden, Trump, Justin Castro, Klaus Schwab and most world “leaders” all belong.

Read this first, if you haven’t already- The Satanic Cult that Rules the World
Sabbateans are the Illuminati
from Nov 13, 2019Is The Protocols Of Zion  A Sabbatean Document?

By Jack Manuelian (Abridged by henrymakow.com)

Certainly the Frankists and their friends belonged to an “elite” new aristocracy.
Marvin Antelman writes: “The Frankist elite consisted of a circle of very gifted intellectuals, theologians and men of letters, as well as a group of men of great financial means who were for the most part great merchant bankers and exerted tremendous influence in their day in the highest financial circles of Europe… the same pattern continuously emerges. Brilliant, wealthy people addicted to power, anxious to assimilate (if they were born Jewish), to destroy religions, to indulge in radicalism, to live cryptic two-faced lives sometimes posing as religious Jews, Catholics, or Protestants but indulging their revolutionary radicalism in secret…” Gershon Scholem, considered the foremost Jewish authority on the Cabala, said the Frankists went underground around 1820, as their emissaries went from town to town and from family to family to collect their secret writings…As the years passed, the economic and intellectual position of the Frankists strengthened. They built factories and became active in Masonic organizations. They were known to have secret gatherings on the Ninth of Av [August] which they celebrated as a holiday, which is the Jewish fast day commemorating the destruction of both Temples.
“The center of Frankist activity changed from Frankfurt-Offenbach to Prague and then to Warsaw. The Frankists in Warsaw who were now concentrated among seemingly Catholic families maintained contact prior to World War II with the Turkish Donmeh Sabbatians, who were centered in Turkey and in Salonika, Greece. The Donmeh was active in the Committee for the Progress and Unity of the Young Turk Movement.” “The Frankists today [1971] no longer call themselves by that name. The Organization has grown into an international group labeled by outsiders as the Cult of the All-Seeing Eye.”  DECEPTION
Gershon Scholem mentions another distinguished belief of the Frankists: A Frankist believer “must not appear to be as he really is. ” 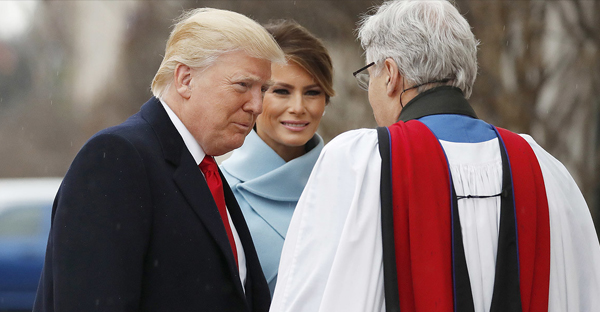 (Trump pretends to be a Christian)
Rabbi Antelman said this belief “justified its followers’ pursuit of the double type of life that they led. One could appear to be a religious Jew on the outside and in reality be a Frankist. For though the Donmeh officially converted to Islam and the Frankists to Catholicism, the great majority of Frankists who outwardly appeared to embrace Judaism integrated themselves into the Jewish community. Despite the fact that they were all outwardly religious, they still cherished as their goal ‘the annihilation of every religion and positive system of belief,’ and they dreamed ‘of a general revolution that would sweep away the past in a single stroke so that the world might be rebuilt.’ The concept of order out-of-chaos is implied here In his book Kabbalah and Its Symbolism, Gershom Scholem writes: “For Frank, anarchic destruction represented all the Luciferian radiance, all the positive tones and overtones, of the word ‘Life.’ The nihilistic mystic descends into the abyss in which the freedom of living things is born: he passes through all the embodiments and forms that come his way, committing himself to none; and not content with rejecting and abrogating all values and laws, he tramples them underfoot and desecrates them, in order to attain the elixir of Life.”
“In this radical interpretation of a symbol, the life-giving element of mystical experience was combined with its potential destructiveness. It goes without saying that from the standpoint of the community and its institutions, such mysticism should have been regarded as demonic possession. And it is indicative of one of the enormous tensions that run through the history of Judaism that this most destructive of all visions should have been formulated in its most unrestrained form by one who rebelled against the Jewish law and broke away from Judaism.” The duplicity of the Frankists is also mentioned in Protocol 7.3 that states: “In order to obtain these ends we must have recourse to much slyness and artfulness during negotiations and agreements, but in what is called ‘official language’ we shall assume the opposite tactics of appearing honest and amenable. Thus the governments of the Gentiles [re. the masses], which we taught to look only on the showy side of affairs, as we present these to them, will even look upon us as benefactors and saviors of humanity.” 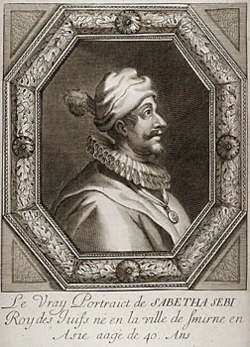 (l. Zvi 1626-1676 was considered the Messiah. The beginning of Jewish tendency to hagiography, i.e. Freud, Marx, Stalin, Lenin etc.)
Another main Sabbatean belief is that “Godhead takes a human form which allowed for leaders of the sect to be incarnated into that Godhead, from Sabbatai Zvi through to Frank and others.” (source Scholem). Hence, when Frankists convert to Christianity and Donmeh convert to Islam, their God does not become Jesus Christ and the Christian Trinity or Mohammad and his Allah but the “Godhead of the Frankists included members of the sect” (Antelman).
Therefore Sabbatai Zvi was their first incarnate God, after him, Jacob Frank was their incarnate God. After Frank, the godly reign apparently passed to the Rothschilds, and now their incarnate god is either a Rothschild god-man or they are waiting for his incarnation and manifestation among them like it is made clear in the Protocols of Zion. Just after a year of his apparent “conversion,” Frank was thrown into jail because of this blasphemy.———-

2 thoughts on “Sabbatean-Frankists are Behind Communism & Covid”