The spokesman is the face a movement shows to the world.  Can we trust Liberals, Leftists and Zionists in this role?Latest!!!   Ottawa Police Chief Resigns

https://www.pbs.org/newshour/world/ottawa-police-chief-resigns-as-trucker-protests-paralyze-canadas-capitalDOUG FORD ADMITS VACCINE PASSPORTS DON’T WORK, “EVERYONE IS DONE WITH THIS.”

Tom Marazzo, above, an appealing, articulate mild mannered spokesman, who quit his teaching job at a community college over the vaccine mandate is replaced by Dagney Pawlak (below) who just months ago worked for federal Minister of Public Safety Marco Mendicino, the man responsible for enforcing Canada’s draconian Communist “Emergency Measures.”
On top of that, she worked for Barack Obama’s 2012 re-election campaign, with Joe Biden as vice president.  Has she had a change of heart, or is she a gun-for-hire? Or is she a plant?

Benjamin “BJ” Dichter, (below) is also a front man for the Freedom Convoy.  He ran as a Conservative candidate in 2015, in the Stephen Harper era.
Dichter is the co-founder and chairman of LGBTory, a homosexual advocacy group for supporters of the Conservative party.

A gay activist named BJ doesn’t sound good, and his  LGBTory site  features articles about attending a gay rights rally in Chechnya and hailing Trinidad and Tobago’s decriminalization of homosexual acts.Dichter is also a self confessed Jew and Zionist, having spoken at several Zionist conferences and events.  Prior to running as a Conservative candidate, he made social media posts  implying that Palestinian casualties of Israeli bombings were actors and voiced concerns about a supposed Islamization of the world.
(Left, Dichter)More recently, he spoke at a Peoples Party event in 2019  where he claimed that Canada was suffering due to political Islam and alleged that Conservative party members had ties to Islamic extremism.

This talk of the influence of political Islam might make sense in parts of Europe that have been flooded with millions of Muslim migrants, many of them hostile and establishing communities totally separate from the rest of the country.  But here in Canada we have no such issue and this is the kind of nonsense one can expect from radical Zionists.  It’s simply not good for anyone but Israel.

Gay Jews tend to be on the Left. What is he doing here?
Freedom Convoy organizer Tamara Lich (below) recently resigned from the board of the Maverick party, led by Jay Hill who was house leader for former Conservative PM Stephen Harper. Lich and Dichter’s ties to Harper are cause for concern as Harper was a die-hard Zionist, seemingly more concerned about illegal Jewish West Bank settlers than Canadians.

Harper also attended World Economic Forum meetings, imposed widely unpopular austerity measures on Canada, and signed FIPA which gives China access to Canada’s natural resources and special privileges for Chinese corporations for a minimum of 31 years while offering us next to nothing in return 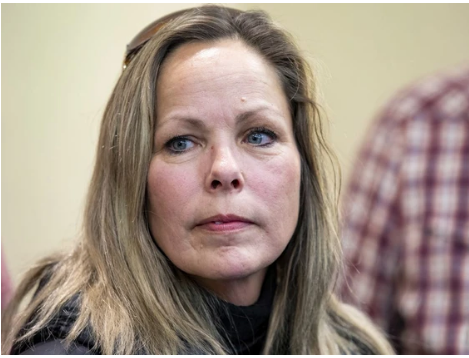 We are supporters of the Convoy 2022 movement but these choices are cause for concern. It is possible that the convoys were initiated to give Fidelito an excuse to impose his bizarre Chinese Communist social credit measures. Nonetheless we believe the trucker protest are effective and justified and show Canadians in the best light.

The spokesman is the face a movement shows to the world.  Can we trust Liberals, Leftists and Zionists in this role?
Below, see the 666 motif on a trucker emblem.

Thanks to CR
Related – Is Trucker Resistance False Opposition?

(The six in the circle)