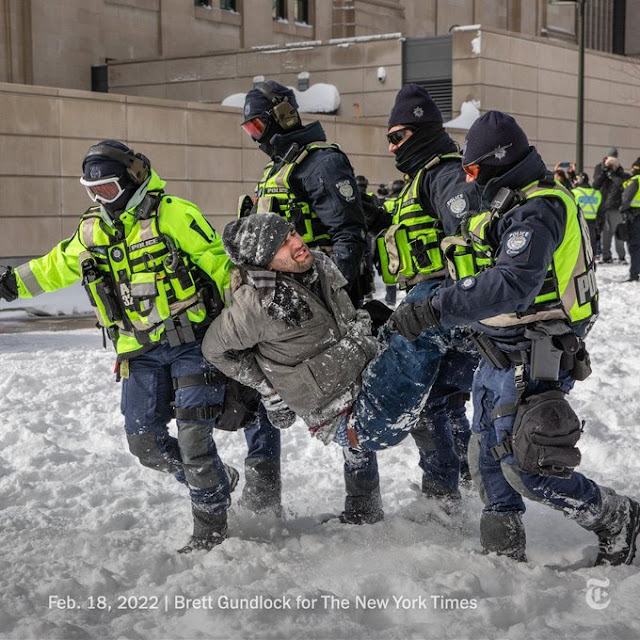 Our corrupt ancestors gave our national credit cards to our worst enemy, Cabalist (Satanist, Masonic) Jewish central bankers. They create the medium of exchange (money, credit) in the form of a debt to themselves, something our governments could easily do, debt-and-interest-free. Communism is the extension of Cabalist control over government credit to satanic control of every aspect our lives — power, property, thought, behavior, movement, expression.  They used this limitless supply of our money to buy our corporations, politicians, doctors, mass media, cops, teachers etc. in order to to steal our birthright and that of our children. The “State” is a front for the Masonic Jewish central bankers who own its “debt.” In 1938, Illuminati insider Chaim

Rakovsky told his NKVD interrogator that the bankers created the Communist state as a “machine of total power” unprecedented in history.  In the past, due to many factors, “there was always room for individual freedom. Do you understand that those who already partially rule over nations and worldly governments have pretensions to absolute domination? Understand that this is the only thing which they have not yet reached.” (emphasis mine)
“The aim of Freemasonry is the triumph of Communism.”

Most people think Communism is an ideology dedicated to championing workers and the poor.  This was an incredibly successful ruse which manipulated millions.

Behind this artifice,  “Communism” is devoted to concentrating all wealth and power in the hands of the central banking cartel (the Rothschilds and their allies) by disguising it as State power.

The central banking cartel is the ultimate monopoly. It has an almost global monopoly over government credit. Its object is to translate this into a monopoly over everything – political, cultural, economic and spiritual.   One world government = Rothschild monopoly = Communism.

Any ideology that further concentrates wealth and power in the hands of the “State” is Communism in another guise. These ideologies — socialism, liberalism, fascism, neo-conservatism, Zionism, and feminism — are fronts for “Communism,” and are organized and funded by the central banking cartel.   Current events are all designed by the central bankers to increase government power.

After The Protocols of the Elders of Zion, “The Red Symphony”  is the finest revelation of the real state of our world. 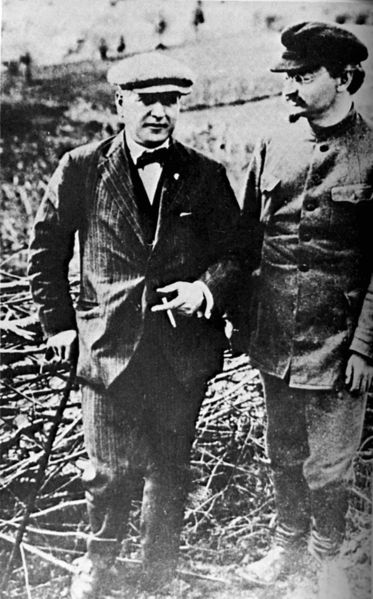 “The Red Symphony” is a 1938 Stalinist Secret Police (NKVD) interrogation of Christian Rakovsky, a Soviet insider seen here with fellow Jew and Rothschild agent, Leon Trotsky. The text is online or in Des Griffin, Fourth Reich of the Rich.

I introduced this explosive 50-page document to my readers in 2003. It strips the veil from modern history and explains the real meaning of Revolution, Communism, Freemasonry and War. It was not intended to become public knowledge. The translator, a Dr. J. Landowsky, made an unauthorized copy.

The human experiment is endangered by private interests who have usurped the function of money creation everywhere.

Modern history reflects the gradual process by which they transfer all wealth and power to themselves, destroying Western Civilization and creating a world police state. In 1938, Rakowsky could say the whole world is controlled by the Sabbatean (Illuminati, Masonic) Jewish bankers and their allies.

In his autobiography, My Life, Leon Trotsky wrote : “Christian G. Rakovsky… played an active part in the inner workings of four Socialist parties– the Bulgarian, Russian, French, and Romanian–to become eventually one of the leaders of the Soviet Federation, a founder of the Communist Internationale, President of the Ukrainian Soviet of People’s Commissaries, and the diplomatic Soviet representative in England and France …”

Rakovsky, whose real name was Chaim Rakover, was sentenced to death in Stalin’s purge of the Trotskyite faction of the party. He tried to save himself by delivering a message to Stalin from the Illuminati. 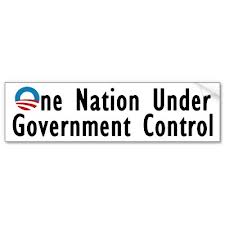 In the process,Rakovsky told his interrogator that the bankers created the Communist state as a “machine of total power” unprecedented in history.  In the past, due to many factors, “there was always room for individual freedom. Do you understand that those who already partially rule over nations and worldly governments have pretensions to absolute domination? Understand that this is the only thing which they have not yet reached.” (emphasis mine)

A pernicious force paralyzes our national life. Rakovsky identifies it: “Imagine to yourself, if you can a small number of people having unlimited power through the possession of real wealth, and you will see they are the absolute dictators of the stock exchange and [economy]…If you have enough imagination then…you will see [their] anarchical, moral and social influence, i.e. a revolutionary one…Do you now understand?”

“…They created credit money with a view to making its volume close to infinite. And to give it the speed of sound….it is an abstraction, a being of thought, a figure, number, credit, faith….” (pp.245-246)

Of course they need to protect their credit monopoly by creating a “world government.” This prevents any country from issuing their own credit (money) or repudiating their debt.

The Revolutionary Movement, which defines modern history, was a means to institutionalize banker power by destroying the old order. Marxism, “before being a philosophical, economic and political system, is a conspiracy for the revolution.” 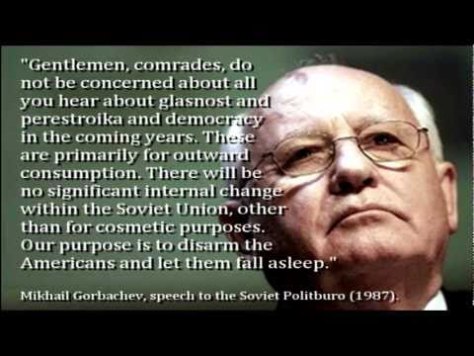 Rakovsky scoffs at the “elementary Marxism…the demagogic popular one” that is used to dupe the intellectuals and the masses. (238)  Marx was hired by Rothschild to dupe the masses. Rakovsky says Marx “laughs in his beard at all humanity.”  (Griffin, 240)  Of course, Marx never mentioned the Rothschilds. (243)

As for Freemasonry: “Every Masonic organization tries to create all the required prerequisites for the triumph of the Communist revolution; this is the obvious aim of Freemasonry,” says Rakovsky, a high-ranking Mason himself.

The aim of the Revolution is no less than to redefine reality in terms of the interests of the bankers. This involves the promotion of subjective truth over objective truth. If Lenin “feels something to be real” then it is real. “For him every reality, every truth was relative in the face of the sole and absolute one: the revolution.”

This is Cabalism: Cabalist Jews create reality because they believe they are the conduit for God’s Will. (In other words, mankind has fallen for a gigantic fraud.)

In other words, white is black and up is down. This is how it was in the Soviet Union; and now in the West, truth and justice are being replaced by political diktat. “Political correctness” a Bolshevik term is now in common usage. Thus, homosexuality which psychiatrists always considered a developmental disorder, became a “lifestyle choice” in 1973 by political diktat. Now public schools encourage heterosexual children “to experiment with their sexuality.” This is unhealthy and unnatural but that’s what Satanism and “revolution” are really about, overturning the salutary inherent order. 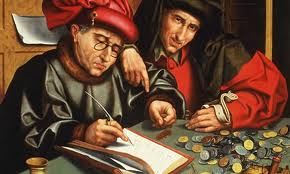 Rakovsky marvels that “the benches on which sat the greasy usurers to trade in their moneys, have now been converted into temples, which stand magnificently at every corner of contemporary big towns with their heathen colonnades, and crowds go there …to bring assiduously their deposits of all their possessions to the god of money…”

He says the Soviet five-pointed star represents the five Rothschild brothers with their banks, who possess colossal accumulations of wealth, the greatest ever known.”

War is the means by which the central bankers advance their agenda. Rakovsky says Trotsky was behind the murder of Arch Duke Ferdinand (which sparked WWI.) He recalls the phrase used by the mother of the five Rothschild brothers: “‘If my sons want it, then there will be no war.’ This means that they were the arbiters, the masters of peace and war, but not emperors. Are you capable of visualizing the fact of such a cosmic importance? Is not war already a revolutionary function? War? The Commune. Since that time every war was a giant step towards Communism.” 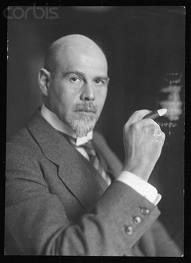 After the murder of [Illuminati member Weimar Foreign Minister] Walter Rathenau in 1922, the Illuminati give political or financial positions only to intermediaries, Rakowsky says. “Obviously to persons who are trustworthy and loyal, which can be guaranteed a thousand ways: thus one can assert that those bankers and politicians [in the public eye] – are only men of straw . . . even though they occupy very high places and are made to appear to be the authors of the plans which are carried out.”  Think Barack Obama.

In 1938, Rakovsky outlined three reasons for the upcoming Second World War. The first is that Hitler began to print his own money. “This is very serious. Much more than all the external and cruel factors in National-Socialism.”

Secondly, the “fully developed nationalism of Western Europe is an obstacle to Marxism…the need for the destruction of nationalism is alone worth a war in Europe.”

Finally, Communism cannot triumph unless it suppresses the “still living Christianity.” He refers to the “permanent revolution” as dating from the birth of Christ, and the reformation as “its first partial victory” because it split Christianity. This suggests that the “conspiracy” also contains a racial or religious factor.

“In reality, Christianity is our only real enemy since all the political and economic phenomena of the Bourgeois States. Christianity controlling the individual is capable of annulling the revolutionary projection of the neutral Soviet or Atheist State.”

Now the Central Bankers are promoting World War Three as in “The Clash of Civilizations.” Substitute Islam for Christianity above, and pit “Christians” against them. 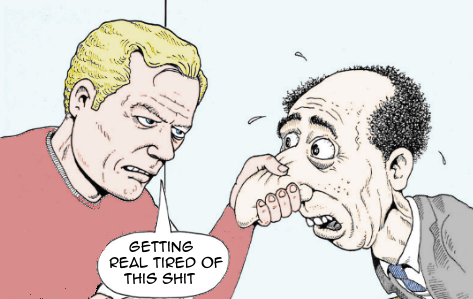 The New World Order creates a false reality which represents our mental enslavement. Legions of pundits, professors and politicos enforce its precepts. These are the argentur  (“agents”) referred to smugly in The Protocols of the Elders of Zion.

Society is totally subverted. Government, education, entertainment and the news media are in the hands of the central banking cartel. The private sector sings from the same songbook on subjects like “diversity.”  The same applies to think tanks, foundations, NGO’s, professional associations and major charities.  Intelligence agencies serve the central bankers. (This article“How the Fed Bought the Economics Profession” is the template for all professions.)

As a result, society is helpless to address its real problem: the concentration of power in the hands of Cabala-believing bankers. We are stymied by the bogus charge of “anti-Semitism” when most Jews are ignorant of the big picture. There is no shortage of lackeys, often Freemasons and Masonic Jews, willing to share the spoils of the bankers’ fraud. This defines “success” today.

Mankind is doomed as long as these bankers control society. What is the remedy? Nationalize the central banks, repudiate debts created from nothing, break up cartels, especially Hollywood and the media, and institute strict public campaign financing. In addition, we need a spiritual revival, a return to true religion, or at least an affirmation of God and a moral order.

But as long as people perceive their interests in terms of the status quo, our problems are systemic and won’t go away.

One thought on “Know Your Rulers – Communism”