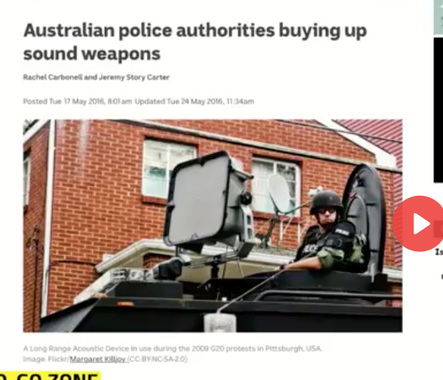 “So, were you impressed by the microwave weapons used in Canberra?

These will be deployed internationally, after a little refinement.

Taxpayers paid for this and we intend to ensure that they get their money’s worth.

Why not? It’s not as if we can be stopped.

I keep telling your readers this and like everything else, my advice falls upon deaf ears.

Wait until you see what other weapons we have. These are coming to a street near you.

Suffering is good for the soul.”“In short, the game was always rigged, because corruption isn’t a problem of society but the basic principle of its normal functioning.”
“The Future”by Aloysius Fozdyke

The Canadian truckers are gone, if not quite forgotten. More plebs get their news from television than any other source. Great, isn’t it?

But long before I was born, the Alpha Lodge realized that the sheeple don’t want freedom, because it inherently comes with responsibility and who wants more responsibilities? Like lambs to the slaughter!

The masses are compliant, expendable filth. We continue to use Paradigm Magick because it’s comparatively easy to do so.

The Sheeple want to be brutalized and we always answer their call!

We’re the only ones who care, as the tears of delight run down our faces.

The Alpha Lodge will be at the apex, beneath them the banks and companies, after them the politicians, followed by the armed services, security services and police and at the very bottom the herd of serfs.

Those at the top will be magicians and initiates of a new spirituality.

There’ll be a marriage of magic and technology. Everyone and everything will be part of the system.

The right-hand path takes responsibility away from the individual by having a formal dogma, a code of ethics and behaviour and by having the individual participate in an organized grouping.

In that way (and to varying extents) the identity of the individual is subsumed by those belief systems and by accepting some higher authority – be such authority an individual, a group or an ideology.

The Alpha Lodge took over these authorities – political parties, the military, the public service, financial institutions, the legal profession, churches, charities and others – by a variety of means and in this way will continue to achieve its aims.

Homo normalis are basically stupid and place their faith in belief systems because they lack the character to make their own decisions. And Xtians with an end-time theology, support and assist the Lodge’s plans and actions because it adds credibility to their own incredulous beliefs.

The world is in a profound wealth and cultural liquidation cycle. The poor you will always have with you, and us!

The battle is an old one. In every generation there was the promise of victory, but now it is already ours.

The middle class, remember them? Now they’re just one pay cheque away from the street. They’re the least of our worries. They vote for our empty suit politicians who continue the brutalization process. It’s necessary.

We’ve constructed societies based on concentration camps because we appreciate the pathetic nature of humanity and take from it what we can.

In short, the game was always rigged, because corruption isn’t a problem of society but the basic principle of its normal functioning.

Xtians often say that ‘the strongest position is on your knees’; just don’t let your kids do that anywhere near a cleric.

At least when we use children, we make no sanctimonious excuses.

To touch kids’ genitals, we don’t have to work in airport security.

To kill children, we don’t have to be in the military.

We appreciate that if your children are the future, you don’t have much to look forward to.

By keeping entertainment below sixth grade level and offering a varied assortment of distractions, we have achieved our aims of working towards a stratified society where we are at the top and the ten-watt masses are kept happy by rigid rules, implacable laws and poverty.

We maintain that the more misery we can give, the more satisfied and manageable the herd will be.

“We believe in the law of the Aeon, which is sacrifice and in the letting of blood.

It’s the only doctrine to which the masses have ever been faithful, that and the aesthetic of disgrace”.

And we give praise to our Prince, the Fire-giver and look forward to His reign and the pleasures which are to come!